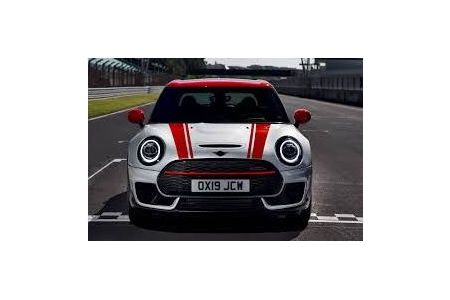 The fastest versions of the MINI Clubman estate and Countryman SUV will soon have much more power. On sale in July, the new John Cooper Works versions of these models will have over 300bhp, as well as a new gearbox.

Prices start at £34,250 for the Clubman and £35,550 for the Countryman. Both cars have a 2.0-litre four-cylinder engine - the same size as before - but with power increased by 74bhp for a total of 302bhp. A new eight-speed automatic gearbox and four-wheel drive come as standard. In a 0-62mph sprint, the Clubman and Countryman take just 4.9 seconds and 5.1 seconds respectively, which is around 1.5 seconds quicker than the outgoing models. The 2.0-litre engine is the same one that’ll feature in the forthcoming limited edition MINI JCW GP model, as well as the new BMW X2 M35i and the next M135i hot hatchback, the latter of which won’t be revealed until the Frankfurt Motor Show in September.

Top speeds of all of these cars will be limited to 155mph. John Cooper Works Countryman - front quarter driving As well as a more powerful engine and a new gearbox, the MINI Clubman and Countryman JCW versions gain a new exhaust system with twin exhaust pipe finishers, and updates to the adaptive suspension. The Clubman sits 10mm lower to the ground than the car it replaces, while both the Clubman and Countryman are available with high-performance brakes.

Both these performance cars offer buyers plenty of standard equipment, too. A special John Cooper Works steering wheel and sports seats, plus dark headlining, are fitted as standard, and the kit list also includes LED headlights, rear parking cameras, heated front seats, and a 6.5-inch infotainment touchscreen with navigation, a reversing camera and phone connectivity. All cars also get black 18-inch alloy wheels. Unlike the MINI John Cooper Works GP, production of these models isn’t limited. You’ll be able to order the Clubman and Countryman JCW from July, with deliveries expected later in the year.