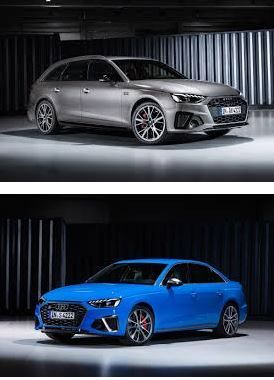 When it arrives in September, the new A4 will be able from around £27,000 in saloon form, with Allroad and Avant estate models also available. Audi says that the facelifted A4 has been redesigned to the extent that only the bonnet, boot and roof panels are carried over from the outgoing model. At the front is a widened front grille that sits lower and features horizontal slats for SE and Sport trim levels, with the Allroad, S line and S4 variants getting vertical chrome slats. The restyled front bumper sports larger air intakes compared with the outgoing car, with contrasting black or silver accents depending on the trim level.

All facelifted A4 models get new headlights, with LEDs now standard on all trim levels. More powerful matrix lights are available as an option. The rear of the car receives the same treatment, with a new rear bumper design and restyled rear light clusters. Further styling changes to the new A4 include cut-lines to the front and rear wings, which Audi says make the car look lower and wider. Additional design cues are also borrowed from the Audi A1 Sportback, such as the slat separating the radiator grille from the bonnet.

Inside, the facelifted A4 replaces the previous scroll wheel infotainment control setup with a new centrally-mounted 10.1-inch touchscreen. An updated version of Audi’s optional 12.3-inch Virtual Cockpit digital dial cluster is also featured with a trio of new display interfaces and a head-up display. Similar to the outgoing car, Audi will offer option packages to further upgrade the A4’s interior tech, including optional driver assistance packages.