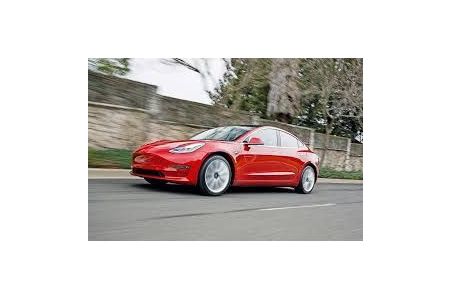 The Tesla Model 3 is the first affordable, mass-produced model in the American manufacturer's all-electric range, offering customers something very different from conventional rivals such as the BMW 3 Series, Audi A4, Jaguar XE and Alfa Romeo Giulia.

The Model 3 has no direct electric rivals for now; it’s more expensive than EVs like the Nissan Leaf and Hyundai Kona Electric but smaller and cheaper than the Jaguar I-Pace. It’s closer to the Jaguar in nature, however, thanks to its minimalist but luxurious high-tech interior, massive desirability and incredible performance. The newest Tesla is a clear evolution from the design of the Model S but with extra emphasis on the amount of interior space that can be gained owing to the absence of a conventional combustion engine. There are myriad clever features, from the key that's actually your smartphone to a single-slot air-vent that can somehow adjust airflow and direction as if by magic.

Three versions are available initially, starting with the rear-wheel drive Standard Range Plus that's capable of 258 miles from a full charge and 0-60mph in 5.3 seconds. Long Range AWD and Performance versions gain an extra motor and four-wheel drive, giving the Performance almost supernatural acceleration - 0-60mph takes 3.2 seconds. These more expensive versions have 348 and 329 miles of range respectively. The Model 3 Long Range AWD feels addictively fast and relaxing, thanks to near-silence from its electric motors. The car’s handling belies its weight, with excellent grip and minimal body roll in the corners, and on British roads the suspension is comfortable enough to allay our fears that the Model 3 would feel too stiff.

On long trips, the Model 3 can be topped up using Tesla's well established Supercharger network (although you will have to pay) or - for the first time in a Tesla - via any other charging network that's compatible with its CCS charging port. Fast-charging to 80% can take as little as 30 minutes, while a full home charge takes just under 12 hours. While there have been some build quality issues, there are no such worries when it comes to safety. Having crash-tested the Model 3, Euro NCAP awarded it the maximum five-star score, and the car posted the highest-ever score in the safety assist category. The Tesla Model 3 has garnered more attention than any other car in recent history, and it seems the hype was worth it. With an excellent driving range, stunning performance and lots of clever features, the Model 3 is in a prime position to steal customers, and not just from its direct rivals.